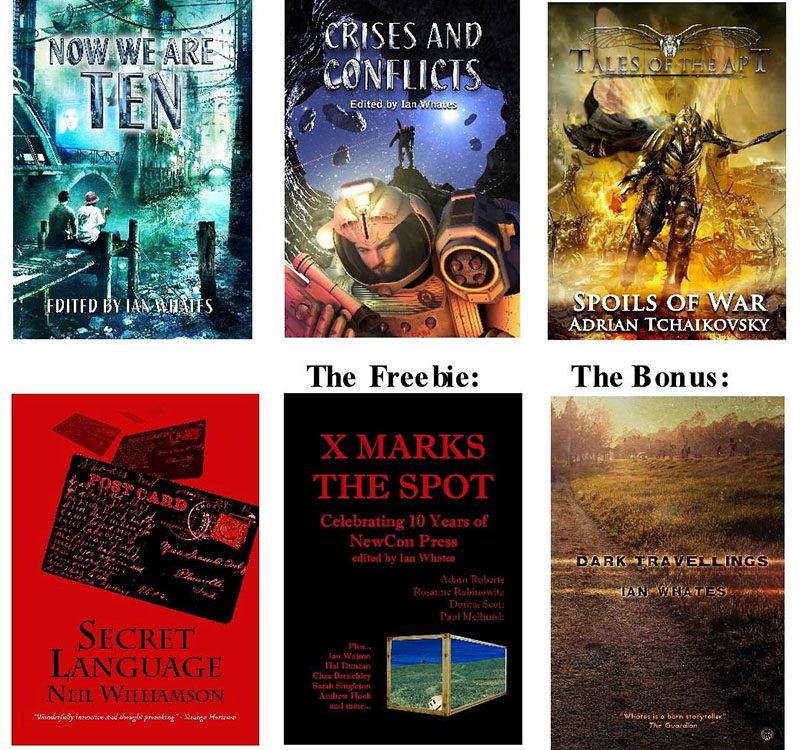 The Legion sign-up competition for an audiobook on CD was won by… Simon Glovebox. Simon, please check your emails or get in touch with a comment so I can get that sent to you. Also a reminder to anyone in London, England this coming Saturday that I will be at the Star of Kings pub. There’s a whole range of events from 1pm to celebrate Newcon Press’s 10th anniversary including Live Music! Book Launches! (the ones in the image above) A unique anthology given to those attending! Real Ale! Exciting Announcements regarding NewCon’s Future! Author Signings!! Lots of Great Company! … And Cake!!   I’ll be there all afternoon but I’m on at 4pm for the launch of Crises and Conflicts, an anthology of military SF short stories from many fine writers that includes a new Human Legion story. There […]
Do you like it?0
6 Read more

SFFWorld.com have just posted an interview with me here. I splurge on about the origins of the Human Legion series and other stuff besides. It’s my first interview in a long while. Why not  hop on over, take a read, and leave a comment? Comments leave a smile on the faces of the good people who put together these websites for our pleasure (plus it makes me look good 🙂 ).   In other news, like me many of you will have enjoyed the Frontlines series by Marko Kloos. Not content with writing a killer bestselling book series, Mr. Kloos has devised a recipe for the Shockfrost cocktail he mentions in his books. Frankly, that’s just showing off 🙂 I can’t say I’ve tried his cocktail yet, but if it’s as tasty as his books, then it will be a […]
Do you like it?0
2 Read more

At some point over the next 12 hours, War Against the White Knights should pop up on Amazon. It will be Kindle-only initially, although the paperback will follow in about a week. I’ll make a big fuss about it next week, but I reckon my job’s done for tonight. Tomorrow morning I’m off to a science fiction convention in Manchester, England for the Easter break. Much more on this next week when I’m back. And future projects too! Enjoy the book.
Do you like it?1
4 Read more

Thanks for your patience, everyone. Here’s a quick update on the progress of Book 5: War Against the White Knights. I finished the first draft of the novel earlier this week, and it weighs in at just over a hundred thousand words. Now, first drafts can be a bit rough, but Ian and I have been editing each other’s chapters all the way through. I’m still waiting for Ian’s feedback on the last two chapters, but other than that the draft pretty tight. Normally, by this point I would have asked for volunteers to sign up to a Force Recon Team. The volunteers from previous books have given us sage advice, but running the Recon Teams takes time, and so I’ve decided not to call for volunteers this time around, so I can get the book to you quicker. I fully intend […]
Do you like it?0
13 Read more

It’s been a tough week in the Human Legion writing shed (pictured). Ian and I had written 18,000 words for War Against the White Knights, the fifth Human Legion book, but we needed to meet to discuss the next stage. Unfortunately, I’ve been too ill this week to write books. Every writer is different, but for me I find it relatively easy to get my head in a place where I can come up with story ideas, but to get in the mental place where I can craft scenes effectively and efficiently is much harder. In a good working day dedicated to writing, I might write 5,000 words of story. Half of that will come in an intense 90-minute burst when the writing is flowing easily. It feels so good, it’s difficult to describe. That 90-minute burst will not only […]
Do you like it?0
18 Read more

I’m very pleased to announce my first collaborative writing project, Human Empire, the fourth in the six-book Human Legion series, is now available to buy from the Amazon Kindle Store here. It’s got space battles, aliens, treachery… all the usual good stuff. We’re moving up in scale too. Ian and I wrote scenes with dozens of ships and tens of thousands of people. Admittedly, we didn’t exactly describe each person’s experience in detail, but we think there’s a greater feeling of scale in this book, something that’s going to get even bigger with the next one. As normal, the book will initially be on sale for a bargain launch price of 99c/99p or local equivalent for at least a few days. I’ve been told off by fans for making my books too cheap. We’re doing the launch price discount partially to reward readers of […]
Do you like it?0
24 Read more