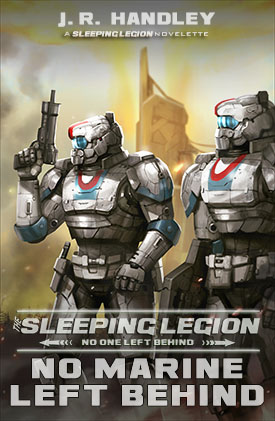 JR Handley’s recent novelette, No Marine Left Behind, is up for a best book cover of the month competition, which is pretty gratifying. Artist Ricky Ryan certainly did us proud. The bad news is that we’re well behind in the voting and there are only a few hours left in round 1. The good news is that it’s fun to vote and you get to see lots of great art, so do it anyway! It took me a few moments to work out how to vote: you click on the cover contest on the top left where it says ‘View Matchup’ and then go through each one-on-one contest. Next round of the competition is tomorrow. Go over and vote.
Do you like it?
2 Read more

The next Legion Bulletin going out very soon to signed up Legionaries will have download links to a new Human Legion short story. Actually, it isn’t new because it’s a slightly revised version of the story I sold to the Crises & Conflicts anthology by Newcon Press a while back, but since that hasn’t sold much, most of you won’t have seen this, and that’s a shame because I’m very proud of it. I can’t tell you too much about it because it would give away some of the twists, but there is plenty of action and hopefully a surprise or two. Today I’ve built the eBook and put some cover art together. I… ahem… have been known to occasionally have […]
Do you like it?
5 Read more