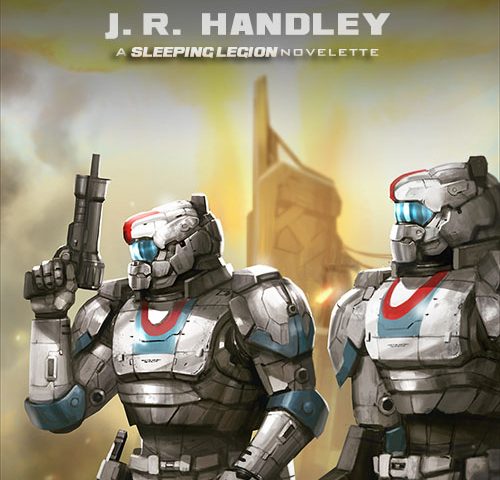 Many readers of humanlegion.com have been in touch to ask whether JR Handley is a real person or a malevolent, alien gestalt intelligence from a hellish dimension intent on dominating our own. Others have inquired if the ‘author’ is really alive at all, suspecting he is really a rogue 1997 code branch of ‘Clippy’, the Microsoft Office Assistant.

Fortunately for these concerned and possibly fictitious individuals, JR Handley has recently spent an hour chatting with Dead Robots Society hosts Paul E. Cooley and Terry Mixon, which you can hear here. Not content with this attempt to prove his existence, JR then proceeded to conduct an extensive interview with Sri Lankan techno-thriller author, Yudhanjaya Wijeratne.

Alien intelligence or Clippy the Office Assistant, either way, one thing you can be sure of is that he writes great books. No Marine Left Behind, his new novelette will be available to buy or borrow on Kindle from tomorrow. This is a standalone novelette that takes as its starting point a scene I wrote in Renegade Legion and turns a few paragraphs into a breathless thrill ride that fits into The Sleeping Legion between The Legion Awakes and Fortress Beta City. You don’t need to read any of those other books to enjoy No Marine Left Behind, but I know some humanlegion.com readers love to know how the future history fits together.

You get get the book from Amazon here. (BTW: if you were in the Legionaries, you had exclusive access to download the new book for free until today. If you’ve not yet signed up, it’s not too late to do so.)

Podium Publishing will do an audio edition of the new book, along with the rest of the Sleeping Legion series, but recording won’t start until the summer. We know who the narrator will be: Jeffrey Kafer. Christopher Nuttall, Glynn Stewart, MR Forbes, Daniel Arenson, Tori L Harris: the list of bestselling sci-fi books he’s narrated is absolutely stellar and we’re very proud to have him on board.

There’s more news (for example, the next full Sleeping Legion novel is not far off release now), but that’s plenty to be getting on with. However, since I mentioned Renegade Legion earlier, I thought I’d pass on a little trivia. Although I think it’s one of the strongest of the Human Legion novels, I was never satisfied with the color on the cover. I’ve quietly released many subtle variations, but the ice-field in the background comes out as too pink on computer screens (it looks great on the paperback and audio CD editions). So I’m getting it redone. It’s still in the stage of a pencil sketch, but that’s Springer pinned down by the Hardit assault on her position, and if you look closely you can see the burns on her face from the events of Marine Cadet. Once artist Vincent Sammy has worked his magic, I think Renegade Legion might become my favorite cover. 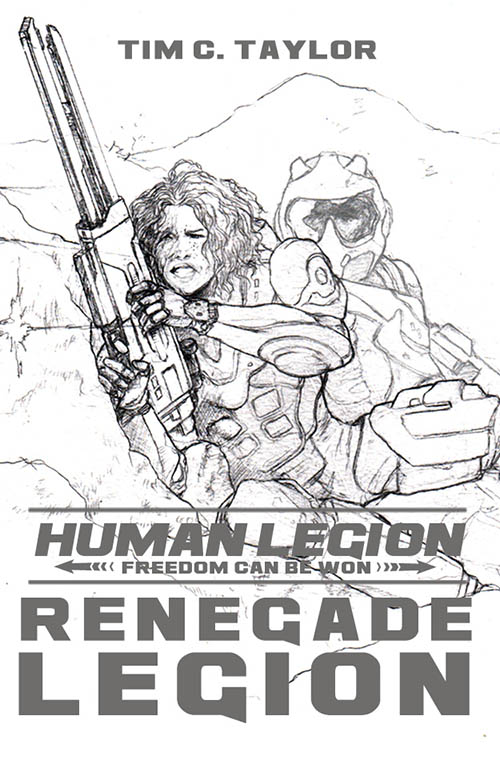