I’ve just typed ‘The End’ and sent off a couple of novelettes for anthologies. One’s a space opera adventure with plenty of exotic aliens. The other is unusual for me in that the story of hired assassins has no fantastical elements. Well, it’s set in an alternate version of contemporary America, so it’s technically a fantasy, I guess, but there are no ray guns or interstellar squids, so I’m keeping it real for this one. Fingers crossed they get accepted.

I have some tidying up and admin things crying out for attention before I start on my next novel. One of those things is the website at humanlegion.com, which I think needs trimming back and then tuning up. If there’s anything you want to see more/ less of, or want to be easier to access, now is the time to bend my ear.

Next release from me is the last Chimera Company novel in this current batch. Hold the Line is out July 2nd.

The meat of this post is an article I wrote for the Legion Bulletin last month, which I’m reposting here for anyone who didn’t get to see it last time. Enjoy 🙂

This article was first published in Legion Bulletin 121, May 2021.

Blasters, Dyson rings, jump space, and intergalactic conflicts: the elements of the Chimera Company books don’t obviously tie to Tolkien’s high fantasy. But there is one respect in which they do.

When I started planning the series, I wanted something fresh, a departure from the extended Human Legion series that I had recently completed. Add up the published word count for The Human Legion, JR Handley’s The Sleeping Legion, and Revenge Squad and it comes to one and a half million words of Human Legion story.

I’m immensely proud of it all. But although I want to return to Revenge Squad one day, I consider the rest of the stories to be complete. I wanted to do something new. I also didn’t want new readers to feel disadvantaged if they hadn’t read the previous 1.5 million words.

That depth of story carries a heck of a lot of weight.

My first thought was to drop a few half-hidden throwaway clues to say, “Yup, this is indeed the story of the descendants of the characters who sailed into the interstellar sunset at the end of the Human Legion books.”

But the weight of those existing stories kept pulling at me, demanding more respect. 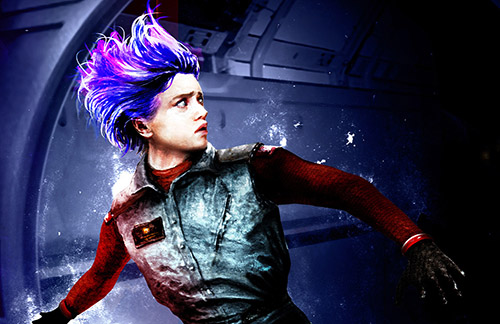 Some random Legion back history 😉

Eventually, I realized that I was following the pattern set down by JRR Tolkien in his high fantasies.

If Chimera Company is the The Lord of the Rings, then the Human Legion series is its Silmarillion.

For those that don’t know, The Silmarillion is a collection of stories in which Tolkien establishes a mythic history of the world of Middle Earth and its many peoples. (It’s also the first adult paperback book I ever bought, when I was about 12. It blew me away and is one of the reasons I now write made up worlds for a living!).

In terms of Middle Earth fictional chronology, by the time of The Lord of the Rings, the events and heroes of the Silmarillion have been forgotten by all but the most learned of people. Only a handful of immortals are still on the scene who actually played a part in those earlier events.

Forgotten they may largely be, but the cataclysmic upheavals of the earlier ages are still shaping the era of the ring bearers.

Those events — the heroes and demons — they are so powerful that they bend the future around their immense weight.

And they clearly informed Tolkien as he wrote The Lord of the Rings*, helping to transport the reader into a realm that was mythic and yet felt uncannily real. If you dig deep enough into the soil of Middle Earth, you half expect to find buried statues of ancient, forgotten gods

And that’s what I hope I’ve achieved with Chimera Company. The majority of the characters are ignorant of all but the most basic shape of the events that took place 3,000 years earlier in The Human Legion. Many of the books’ readers will be the same. And that’s absolutely fine. Those earlier books are neither an obligation nor a burden.

What all readers will hopefully take from my writing approach is a sense that the Chimera Company universe has not just popped into existence out of the ether, conjured by a random spark in the author’s brain. It’s come from somewhere real. A deep past, dense with heroes and cataclysmic events.

In the worlds of Chimera Company, if you listen carefully, you can hear the past echoing across the millennia.

*The Silmarillion was published posthumously in 1977, but the earliest parts of it were written over 60 years earlier when Tolkien was on leave from the front during World War I. The first draft was completed in the mid-1920s. Work began on The Lord of the Rings at the end of the 1930s, and Tolkien’s hope was that The Lord of the Rings and The Silmarillion would be published together as two separate volumes.

Then, as now, authors don’t always get their way!