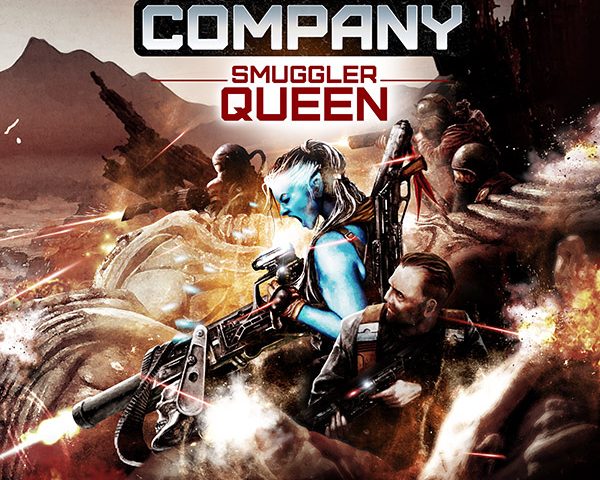 Prior to this, the Theogony novels have been a mix of new material and old. Smuggler Queen is all new.

I sent the the fifth novel, Hold the Line, off to the publisher yesterday today. Hopefully they’ll like it, because it’s due to be published next month! I also was fortunate enough to have my second Covid vaccine yesterday, and my brain is currently mush being massaged by a pneumatic drill. Hopefully these words make some kind of sense! If they don’t, blame the vaccine. (Astra Zeneca — I used to work for them a long time ago. It was a great place to work)

The first five Chimera novels come as a set. A season if you like. Everything changes at the end of book 5 and the sixth book will be a little different. I haven’t started writing that one. It’s still fermenting.

Here are some links if you want to go read a sample or buy the book. You can start off with the first book, but with Chimera Company, it works best old school by starting at the first one (The Fall of Rho-Torkis)

Next up for me are a couple of novelettes where I get to play in other authors’ universes. I should be in four anthologies this year, which is always a lot of fun. I get invited to write in anthologies but it doesn’t necessarily follow that I will come up with a good idea or that my story will be accepted. Neither misfortune has happened yet, but fingers crossed all the same.

The first five novels are booked for narration into audiobooks. I’ve listened to The Fall of Rho-Torkis and it sounds awesome. In fact, the narrator, Steve Campbell, has a Discord channel where you can listen to him work and chat with him. It’s a great idea. Maybe I should do something similar? You are very much on display, though, and Steve’s total professionalism comes through in abundance. He works each line again and again until every little syllable stress and intonation is exactly the way Steve wants it.

Hey, I can be professional too! All I need to do is put on some pants and I look total pro.

Talking of audiobooks, the audio for One Minute to Midnight was released a little while ago but got lost in the mix so I didn’t mention it. So that’s all four 4HU novels I’ve written out in audio. BTW: One Minute was probably the most writing fun I had last year. Co-writing with Chris Kennedy was a blast, and it was an honor to get to write some SalSha and Golden Horde characters (which are both Chris’ creations)