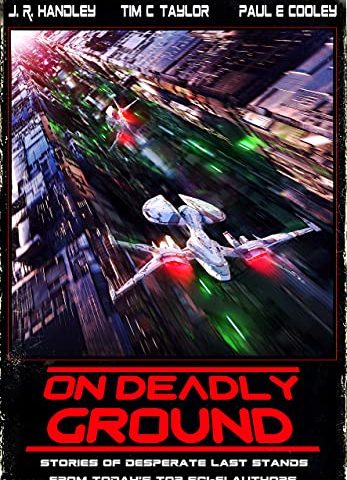 The latest anthology from Bayonet Books is out and my name is on the cover! (And what a great cover it is too, courtesy of Jamie Glover).

On Deadly Ground: A Heroic Last Stand is out today and features Ten Tales of glorious (?) last stands. My story features Steve “Stiletto” Cauldwell, the anti-hero of the Time Dogz. Not entirely through choice, he is embroiled in humanity’s desperate last stand in the shadow of the beautiful rings of Saturn.

This was a try out for a potential new books series. I’m about a third of the way through the first Time Dogz novel, so Stiletto must have done something right for me.

It’s out now as a Kindle book. There should be a paperback any moment soon.

Yesterday saw the launch of the audiobook for Operation Redeal, the second Chimera Company novel. Steve Campbell does a fantastic job as the narrator. We’re so lucky to have him on this.

I don’t like reading my own novels until I’ve had a few years to get some perspective on it. I’m not sure why. Perhaps by the time I’ve gone through so many editing cycles, it takes a lot of concentration for me to read it just as a story, and that just isn’t fun. Some of my teachers when I was very young were convinced I was dyslexic. Sometimes I wonder if they had a point.

So it was pure pleasure to listen to the narration as a quality check for the audio because I could lose myself in the enjoyment of the story that someone else was not only reading for me but bringing to life. Obviously, I had to keep my concentrating ears on because I was checking the text all the way through, but it was no hardship at all.

In case you missed it, last month saw the release of the Salvage Title Universe anthology, It Takes All Kinds. My name’s on the cover of that one too! The Salvage Title Universe is a big pulpy playground that features a huge number of alien races, some of whom cooperate with humans, and others… less so. At the heart of the early novels — to my mind, at least — it’s above all about friendship. It has a very different feel from, say, the Four Horsemen Universe, in that there’s no galactic-wide entities that try to control everything. It’s diffuse and diverse.

My story is called Laney’s Logistics Ain’t Recruiting. It features a young alien on a work placement. She’s living in a Heinlein juvenile. The humans she works for… they’re much more adult.

In other anthology news, my latest 4HU story came out in July in the anthology In the Wings.

That will be around six anthologies over a twelve month period. I didn’t plan to be writing so many of these novelettes, but editors keep asking for my stories, which is a marvelous thing, of course. My apologies to the anthology editors I’ve turned down. I don’t have enough hours in the day to fit you all in.