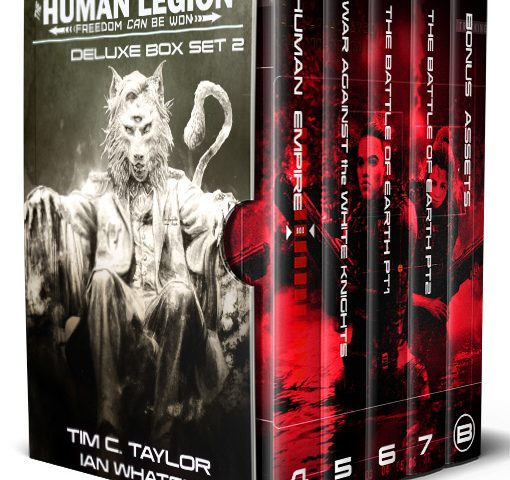 Being briefly in between projects, and temporarily not fit enough to write new stories (I think I had the Corona-bug – I was certainly in self-isolation for a couple of weeks), I finished off the second and final Human Legion boxed set, which several people had been bugging me to finish off.

Just in time, as it turns out, because I’ve now started work on my fourth Four Horsemen Universe novel.

As with the first boxed set, I added author notes and collected some short stories. Most of these were originally published in the Legion Bulletin a few years ago, but I tweaked all the stories and redid the notes.

I can tell from my Amazon sales dashboard that most people who read my books are doing so through Kindle Unlimited. If that’s you, then you can borrow the box sets in KU and read just the notes and revamped stories if you aren’t up for re-reading the novels. Neat.

Here are the contents listings for the two sets.

I’ve got my family with me in the house off work/ off school during lockdown. No slacking off to procrastinate now – not with everyone watching what I do in the office all day instead of going out to a proper job. Which is good, because I’m hungry to write!

I also managed to sneak in a couple of podcast interviews, which were a lot of fun to do. I’ll pass on details when they’re up.