Bloodied yet defiant, the Legion survivors emerge from the Hardit onslaught.

THE FIGHT BACK STARTS HERE…

Lance Scipio and the defenders of Fortress Beta City have emerged from the Hardit onslaught, but to liberate an entire continent is a far greater challenge. Costly mistakes will be made, and to survive Lance must rely upon the most dangerous soldiers in the Sleeping Legion — impossible warriors who should not exist.

But whose side are they really on…? 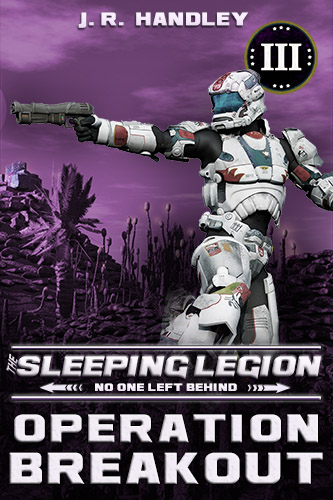 If you’ve been waiting for the latest installment of the Sleeping Legion by JR Handley, then your wait is over. It’s available now. What’s more, for a brief period Operation Breakout will be at the special launch price of 99c to help get us some bestseller chart visibility. It’s also available to borrow through Kindle Unlimited.

You can click on the cover image to launch into a Kindle instant preview, or follow these links for the Kindle and the paperback edition. There’s an audio edition in the works too, but that won’t be available later in the year.

If you’ve not yet bought or borrowed the Sleeping Legion books, then there’s never been a better time because the first book, The Legion Awakes, is also on a 99c promotion for a few days. Snap it up here, or  follow this link for an instant preview.

There’s more information on the series and JR Handley here.

Well done to the team for turning in another great novel. I want to thank the author and editors, but it’s also my pleasure to thank the many behind-the-scenes members of the team who helped with other admin or support work, or provided early reader advice or ARC readers, some of whom have kindly left reviews already. Thank you. Now stop listening to me rattle on and go get the book.