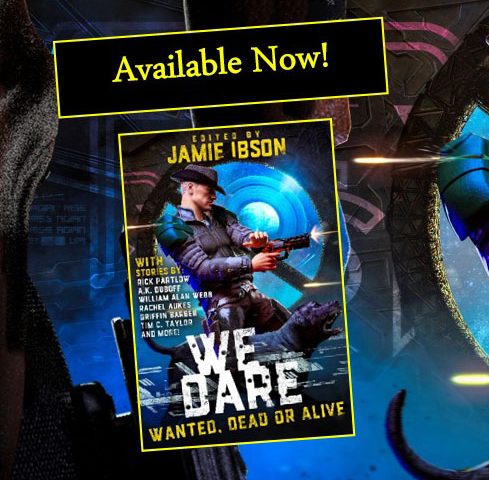 You know how it is. You go for weeks and then two anthologies turn up at once!

We Dare: Wanted Dead or Alive came out last week and is themed on bounty hunters and the hunted.

My story, FRAkkers, features a mutant bounty hunter and his cyborg sidekick.

The name comes from the Felon Recovery Agency, which regards their ‘Baleview’ bounty hunters to be just as bad as the felons they hunt.

When I was a kid, I enjoyed the Strontium Dog strip in 2000AD comic. I remember someone at the Search/Destroy Agency who hated his mutant bounty hunters so much that he hoped some of them would be killed bringing in a particular bounty.

That might be a false memory. It was a long time ago, after all, but it sounded good and that was the seed to FRAkkers.

Incidentally, another memory of Strontium Dog was the double cross, double-double cross capers when anti-hero Johnny Alpha came up against the Stix Clan. That’s another memory that I might have made up over the last forty years, but it was the idea that inspired my first Midnight Sun short story. I ended up writing four Midnight Sun novels, so maybe FRAkkers will lead to something too?

You can find more about We Dare: Wanted Dead or Alive here: https://www.amazon.com/gp/product/B09ZH6PWZS

Yesterday saw the release of The Sussex Job, which is my first foray into post-apocalyptic fiction. It’s in the anthology  Standing Fast on Foreign Shores: Stories in the Last Universe Brigade.,

I started reading The Last Brigade series of novels last summer, and it was a question of reading one book after the other until I’d finished the lot. Sleep was sacrificed; knowing what happened next was all.

The premise is that the world is going to the dogs and before everything collapses, the US military secretly buries a unit in cryogenic suspension under a desert mountain.

Half a century on, they are wakened into a world that has collapsed and moved on. Fragmented. Even if the Last Brigade can liberate some of the pieces from the tyrannies and lawlessness that came after the Collapse, they can’t be reassembled into the same United States that came before.

But the Last Brigade was entrusted with a mission, and they will carry it out against all odds.

Big characters. Big battles. And plenty of unexpected twists. It’s very well written, but what happened post-Collapse outside of the US?

One of the best things about being an author is that on occasion I get asked to play in a universe that I first enjoyed as a reader.

Series showrunner William Alan Webb has assembled an international team of authors to shine a light on the world outside of the US.

The Sussex Job is set in post-Collapse England. Part caper story, part post-apocalyptic action & adventure, we see canals, castles, and Colchester. And why not? It’s every author’s prerogative to fictionally blow up their home town once in their career.

In terms of where the name came from for The Sussex Job, all I’ll say is that my mate, JR Handley, has written about science fictional British royals and I decided it was my turn.

Castles and royalty in a post-apocalyptical landscape. What could be better than that?

You can find out more here: https://www.amazon.com/gp/product/B09W1TPSCX