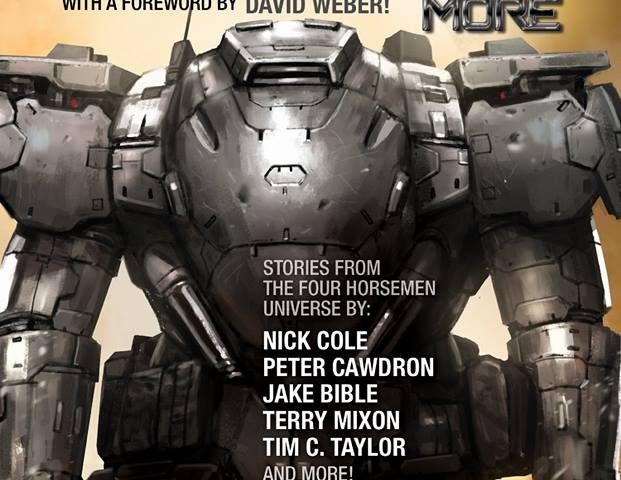 Welcome to a story of deception and daring, inspired by in equal parts by the Goodwood Revival car racing festival and Strontium Dog, the bounty hunter from 1970s 2000 A.D. [more on the inspiration at the end]*

This is “Contract Fulfilled” my first 4HU (Four Horsemen Universe) story, which ended up in the excellent anthology For a Few Credits More back in 2017.

I only intended to write the one story, but I enjoyed the other stories in For a Few Credits More so much that I thought there might be something to this 4HU thing and I wanted a part of it.

After “Contract Fulfilled”, I took the characters I had developed within the 4HU setting and went on to write three more novelettes, three novels, and co-wrote a fourth novel with Chris Kennedy.

There was also Lego.

And German-language versions for some.

So there must have been something to that first story.

I mention this because the publisher has just notified me that for today and tomorrow, this book is on sale for only 99c/99p. https://www.amazon.com/dp/B075LGF41H/ Besides, this gives me a chance to reminisce about why I came up with that particular story.

How did the publisher notify me?

Well, I like to think it’s personal, but of course thousands of other people receive it too.

Yes, it’s the Chris Kennedy Publishing newsletter. It makes an excellent gateway to adventure and you can get it too. https://chriskennedypublishing.com/newsletter/

*So, what’s all this about Strontium Dog meets Goodwoods revivial?

When I write stories, I often start with two or three questions/ inspirations/ challenges. I blend them together and see where they lead. For Contract Fulfilled it was write something inspired by Strontium Dog and Goodwoods Revival, and then make it work in the 4HU universe (or a very early version of that universe, as it turned out).

Strontium Dog was a mutant bounty hunter in 2000AD comic, written and illustrated by the same team who created Judge Dredd. The story went in many directions, but I was most interested here in the deception and double crossing of the earliest bounty hunter days, often trading double crosses with rivals the Stix Clan. https://en.wikipedia.org/wiki/Strontium_Dog

In the Goodwoods Revival festival, vintage sports cars are raced. Hard! This is where you get pristine Jag E-Types taking on Cobras and the like. In many cases, the owners of the cars hire drivers to race them on their behalf.

I was intrigued by this idea. What if an entire mercenary company was kitted out by a super rich silent backer in pristine vintage equipment just because it would be a cool thing to do?

Having inspired the original story, that was the question that played out across the following four novels until its ultimate answer in One Minute to Midnight.