Last month I announced the new Legionaries group with the prize draw of a signed Human Legion audiobook on CD.

The winner of the prize draw is Thomas with a Comcast email address and who I think might hail from San Diego.

Thomas, if you’re out there, please get in touch. I’ve been trying to reach you for the past month! 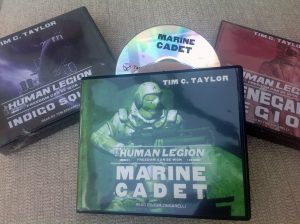 For everyone else, fear not, I’m going to do another draw at the end of the month for a signed audiobook (on CD) of your choice out of Marine Cadet, Indigo Squad, or Renegade Legion. My publisher (Tantor Media) gave me a few but they’re running out, so I won’t be doing this regularly with the audio CDs. There are rumors of other swag that might be forthcoming, such as official Liquid Refreshment Dispensers bearing the insignia of one of the units in The Sleeping Legion. Here are some very cool LRDs for those who don’t know what on earth I’m talking about.

If you want to be in the draw for the signed CD audiobook, all you have to is be signed up to the Legionaries group by the end of the month. If you’ve already done so, you’re already in the draw. If not, then sign up without delay!

If you just want to listen to the audio, if you’ve bought the Kindle edition, you can add the audio narration for just a few dollars from the book’s Amazon page. Only the first three are in audio so far. If they sell well, I hope Tantor will make me an offer to publish the others.

I’ll be doing an inaugural launch of the Legion Bulletin, the exclusive Legionary publication, very soon with news of how to get access to pre-release editions of forthcoming books and get involved with the recon teams to help steer the course of their development. I’m currently expecting the recon editions of two novels to be forthcoming next month. Get involved with the recon teams and you could be a redshirt in a forthcoming novel. Just don’t expect to last till the end of the book.