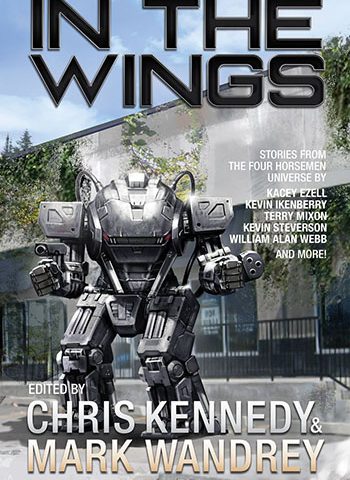 My latest book has just come out in Kindle and paperback editions from Seventh Seal Press. This is In the Wings, the latest Four Horsemen Universe anthology. The first anthology (A Fistful of Credits, 2017) was my introduction to the 4HU, and it excited me enough that I was soon writing 4HU stories myself. I hope this new 4HU anthology (the tenth!) will be a happy starting point for some more readers.

In this book, fifteen of us have taken leading support characters from earlier stories and made them the stars they always were. My story was about how rogue trader, Captain Jenkins, fell foul of the Earth authorities and wound up plying the trade lanes of the Spine Nebula.

Was… but then I had an even better idea and wrote that instead. 😉

Here are some links to find out more…

And here’s the track listing.

“A Night on the Town” by Kevin Ikenberry
“Alive and Well” by Kevin Steverson
“Embrace the Void” by Marisa Wolf
“Monster at the Gate” by Tim C. Taylor
“Oogars, Guns, and Credits” by William Alan Webb
“Second Fiddle Carries the Tune” by Jon R. Osborne
“Sugar and Spice” by Terry Mixon
“The Price of Pride” by Chris Kennedy
“Friends with Benefits” by Mark Wandrey and Kacey Ezell
“Barn Find” by Richard Alan Chandler
“Field Promotion” by Nick Steverson
“Lucky Beginnings” by Zachary Ritz
“Playing the Game” by David Shadoin
“The Audition” by Casey Moores

In related 4HU news, William Alan Webb (who is one of the In the Wings writers) won the Imadjinn Best Science Fiction Novel award last weekend for High Mountain Hunters, his standalone 4HU novel featuring the Gurkhas. This is a big deal! Big congratulations to Bill, as well as Barbara Evers, another Chris Kennedy Publishing stablemate, who won the best fantasy novel award. Well done all.

And talking of awards, thank you for everyone who has nominated The Fall of Rho-Torkis for best science fiction novel in the Dragon Awards. If you want to vote for that book, or any other that takes your fancy, then you’ve got a few days left to make your nominations here… https://application.dragoncon.net/dc_fan_awards_nominations.php