Attention listeners of the the Sleeping Legion in audio: the final chapter is out March 6th. That’s right, Insurgency: Spartika, narrated by the ever excellent Jeffrey Kafer is out via audible.com and amazon. If you have an audible subscription you can pre-order before the title comes live tomorrow with a spare Audible credit. If you buy or have already bought the Kindle edition, you will be able to add audio narration (which means you get the audiobook, basically — it’s called Whispersync for Voice) for a knock down price, although it sometimes takes a while before Amazon cranks all the handles to make that happen.

Four novels, one novella, and one novelette: the Sleeping Legion is a fantastic adventure, and hats off to JR Handley, Corey Truax, Lauren Moore, Jeffrey Kafer and the other members of the team for delivering such a successful series. Sadly, the adventure that began with The Demons of Kor-Lir, and also with Human Empire, has now concluded. However, that doesn’t mean that all the characters have taken off their boots for the last time. Some will have a crucial role to play in The Battle of Earth, the conclusion to the Human Legion story. There are also a few questions only partially answered, just enough for JR Handley to come back one day to write the Rakasa story.

The Sleeping Legion sure turned out bigger then I expected. I’ve just looked over the original Sept. 2015 contract, which required JR Handley to turn in three novellas of no less than 25,000 words by summer 2016. I’m very glad we reimagined that into a more epic tale, and if you hear JR Handley’s excellent new podcast, Sci-Fi Shenanigans, you’ll not be surprised (because JR is clearly a person with plenty to say).

Regarding the main Human Legion series: I took time out from The Battle of Earth to write a novel for the Four Horsemen Universe (The Midnight Sun; due May 27th, with a promotional Lego video in pre-production – we have to buy a few bricks first) and when I came back, I realized I had been trying to squeeze a widescreen novel into an Instagram video. So I’ve opened up the novel to let it breathe as it deserves. That does entail me writing an additional 40,000 words (which I’m now halfway through) and reworking large sections of the first draft. Consequently, there’s another delay, but I’m convinced this will deliver a better climax to the series. 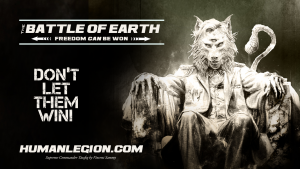 The release will come in two parts within a day or so of each other. Each part will be told in a different style, but the two will combine, pivoting on a revelation revealed at the end of part1.

I don’t want to promise a date, since I’m not always good at hitting them, but I am aiming to deliver then both before The Midnight Sun comes out at end of May.

Of course, there’s another series in the Human Legion Universe: Revenge Squad. It’s divided opinion, all right. It’s had the strongest praise for anything I’ve ever written, but I know some fans of the Human Legion and Sleeping Legion vehemently dislike it. Until now it’s been an Amazon-exclusive eBook, which means people can borrow it through Kindle Unlimited. I’m going to be selling it through other channels very soon, so if you wanted to borrow it for free through KU, this is your last chance. Book 1 (Hurt U Back) leaves KU on March 13th and the other two books on March 15th. If you check it out through KU now, you can still keep reading after those dates, you just can’t add it to your KU library after that date. You can also download Hurt U Back for free from Amazon for a few days starting March 7th.

If you want to check out this series, head on to the Revenge Squad page for more details.

If you’re a Revenge Squad fan, you’ll be pleased to hear that there will be at least one more Revenge Squad novel, just not this year.

I need to finish up and post this now, because it’s Monday night, and that’s currently my Chimera Company night, where I head off to my local pub (The Swan at Bromham) and sketch ideas for the characters, setting, plots, series baddies and starship designs for the next instalment in the Human Legion Universe. Maybe I’ll have a beer while I’m there 😊 I think of Chimera Company as a prose comic: a cross between the original Star Wars and 2000AD, a short slug of sci fi adventure that gets delivered (almost) automatically every week, and which I aim to be delivering by Fall 2018.

I’ll be trying the stories, characters, artwork and other ideas out first with signed up Legionaries. If you haven’t joined up yet, there are plenty of other exclusive content to keep you going and you can sign up simply with your email address by following this link. 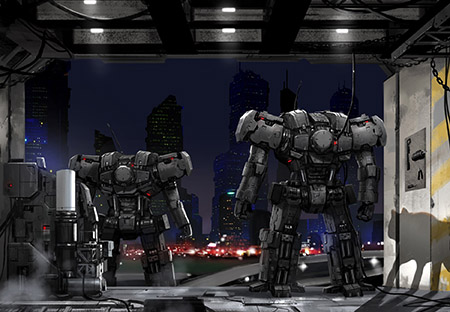 I’m very busy with the writing at the moment, but I do get a little time to read. If you enjoy cats, mercenaries, exotic alien worlds with exotic interstellar societies then you might enjoy the book I’m reading at the moment: Assassin by Kacey Ezell and Marisa Wolf, which is set in the same Four Horsemen Universe as my forthcoming novel. I’m about a third of the way through and enjoying it thoroughly. The book has an intriguing blend of modern day sensibilities with a classic, maybe 70s feel, which is no bad thing. If I had to give a point of reference, I would describe it as halfway between Halo and Anne Maffrey’s Dragonriders of Pern. If you’re intrigued, you could follow the link to read the book (which is in KU), or better still, go listen to the authors join JR Handley and his co-presented Chris Winder in their recent podcast episode. And then buy the book.

That’s it for now. Thank you for all your support. 2018 is going to be an awesome year for the Human Legion 😊