The first Chimera Company story is out now, published by someone else!

I hope you had a marvelous holiday season. We spent Christmas with my parents and it was great to see several generations getting on so well and relaxing after a hard year. I’m almost ready to release the season Chimera Company issues to Insiders (I’m hoping next week), but I wanted today to let you know about Legion alumnus JR Handley.

First off, JR put together his first anthology a month ago, Backblast Area Clear. It’s got an Ember War story from Richard Fox, a Chimera Company universe story from me and plenty of other goodies. Anyway, I wanted to mention the book because in the US there’s a 99c Kindle deal that ends tonight (I think). It’s always good value, but if you were hesitating for some strange reason, then grab it now.

Secondly, JR’s teamed up with his bearded muse, Chris Winder, to release a standalone short book called Vacuums Suck Hard: Adventures of the USS Big Stick, in which Gunny John Doe of the Space Corps has to save the day against the dastardly space baddies and learns that there is more to the Corps than maintaining perfectly sculptured pecs to impress the ladies (but not that much more). I started reading this today and it’s silly, hilarious, rude, and great fun. Standby for more books coming soon from JR, including a novel set in the Galaxy’s Edge Universe. Oba!

When I haven’t been doing holidays or visiting overseas to help brothers get married and watch large men on skates hit a puck around some ice (since I last posted, I have discovered I love ice hockey!) my attention has been on Chimera Company. I should be writing the last scene of season one on Monday. The artwork by Vincent Sammy is great and coming in fast, and I’ll leave you with best wishes for an awesome 2019 and an illustration of Sapper of the Legion Hines Zy Pel, who often goes under the alias of “Bronze”. And it is a prequel story about Bronze that I wrote for the Backblast Area Clear anthology. Here he is now. 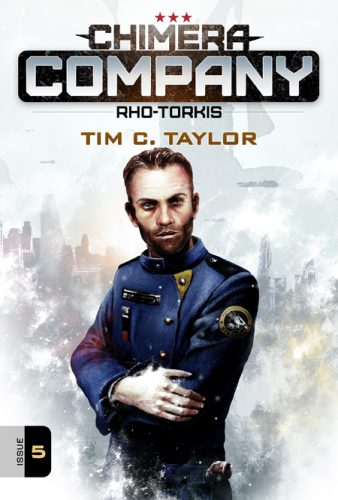