I’m back from a week’s camping and can confirm that my 2010 Kindle3 with Amazon leather case (with built-in light) still needs just a single charge to supply a week’s worth of reading at night in my sleeping bag. I read Explorations: War and Golden Horde, which (was) the latest in the 4 Horsemen Universe series. Great stuff.

I didn’t listen to audiobooks, but if that’s your thing, then Demons of Kor-Lir is available to stream now. This is the prequel novella to JR Handley’s Sleeping series that we licensed to Podium Publishing, and it sounds great! To get to the audiobook, you need to register with audfans.com (which is free and doesn’t require credit card details) and then you listen to the story through  Soundcloud. For me, that means pressing play on the website here and off it goes, but you can get a Soundcloud app too. Don’t think you can download the mp3, though. You can also get the audiobook of The Legion Awakes now from Amazon or Audible. 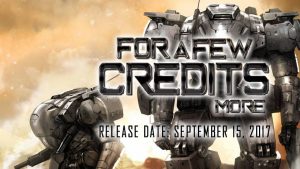 Talking of the 4 Horsemen books, I’ve enjoyed them so much, that I wrote a novelette for the forthcoming anthology, For a Few Credits More. Even better, JR Handley and Sleeping Legion editor, Corey Truax, co-wrote a story in there too. The book comes out September 15th. My story is called Contract Fulfilled, and I definitely had Strontium Dog from 2000AD running around my head when I penned that one.

For Revenge Squad fans, I’m still getting feedback on Damage Unlimited and expect to release that to signed up Legionaries later this month. The new novel, Second Strike, will also be out on sale this month.

The rest of the week for me, though, is full on writing The Battle of Earth. Can’t wait to bring that beauty to you.