The Sleeping Legion will arrive in audio over the next couple of weeks!

Demons of Kor-Lir and The Legion Awakes are published by Podium Publishing and narrated by Jeffrey Kafer (who narrated Earthrise by Daniel Arenson, the Frontiers Saga by Ryk Brown, Blood on the Stars by Jay Allan, The Empire’s Corps by Chris Nuttall, War Eternal by M.R. Forbes, Starship’s Mage by Glynn Stewart and a whole host of other cool books that I can’t be bothered to type up.) I’ve heard the recordings myself and they are very classy.

Demons of Kor-Lir is the prequel novella, and Podium will be releasing that around August 27th exclusively through AudFans.com. Now, this is a new place to me, as a relative audio newbie, but is a great way for audio publishers to give away free introductory novellas and bonus stories. You can register for free. Don’t need to give credit card details or any of that kind of thing. Once you’ve signed in you will soon be able to find Demons here.  Soon (my precious). [Latest update: Demons is expected August 27th] 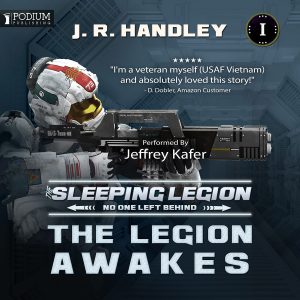 The Legion Awakes is bundled with the novelette, No Marine Left Behind, and is available for pre-order now through audible.com and amazon for release Sept 5th. If you have an audible.com subscription, you can buy the audio with your monthly credit. You can’t yet do the thing where you buy the Kindle edition and add in the audio narration, but that will be forthcoming. You can find it on Amazon at the same page as the Kindle and paperback editions.

Fortress Beta City is in the process of being recorded, and tentative release date is mid-October.

Operation Breakout is more tentative on dates, but smart money is on late Nov/ early Dec.

The fourth book hasn’t been recorded yet. I’m tempted to be disappointed at Podium slacking off on this, but that would be somewhat harsh because Team Handley is still working on delivering the next draft of the manuscript! But an audio edition is definitely in the works.

It’s been a pleasure to work with Podium on this. They do seem to be a very clued-up outfit who know exactly what they’re doing, and I’m sure Sleeping Legion fans will be delighted with the results.