The final Human Legion novel is sketched out and I’m starting to write the scenes in detail. Here’s one I wrote yesterday. I hope you like it. Let me know what you think 😉

On his rookie combat tour, Marine-Grenadier Michael Rosenberg had imagined his first tactical assault would be the worst: that the experience would get easier with every time he flew into combat, strapped to the outside of a Tactical Unit warboat squeezing every last bit of juice out of its engines to avoid enemy fire.

Rosenberg tried to relax his mind into his training, but the assault was already way off course. They should have hit the Carbuncle head-on from space, but instead the TU squadrons were coming at the enemy command and control center from underneath, inviting incoming fire from the Lunar surface defenses. And they were taking the long way around because the Hardits had known the precise timing and route of their assault, sowing their assault path with traps and mines.

How could anyone possibly train to defeat an enemy who knew your every move?

Relaxation evaded him. Despite the buffer gel cramming every body cavity to protect him as his warboat, DeRuyter, thrashed in random directions, it still felt as if an army of giants was smashing his chest with hammers.

DeRuyter was one of the latest generation of TUs, fitted with the new inertial dampers that used the momentum-dump tech that had proved so successful with the X-Boats, but that only meant that its commander, Lieutenant Harper, flew the spherical warboat with even more bone-crushing acceleration – so much so that even Rosenberg’s AI couldn’t construct a meaningful visual image on his helmet visor.

The gray-white blur that kept reappearing on his visor had to be Luna, the most famous moon in the galaxy. He should be able to glimpse Earth itself, but the crazy jinking made that completely impossible.

Rosenberg’s heart beat a fraction slower. Sergeant Major Hecht was not a man Rosenberg could ever describe as likeable. But at a time when their battle plan had been thrown out the airlock, and there were surely traitors in their midst, Rosenberg needed someone or something in which to place his trust.

Menes Hecht was that something. Hecht would know what to do.

“The next few minutes are going to be hell,” Hecht said calmly in that rich bass voice of his that sounded as if he swallowed rocks for breakfast, and washed them down with grok. “For the enemy more than you, because you will keep one thought clear in your heads no matter what you face. You will remember that you are Tac Marines. You are not the early hominids they recruit for the assault regiments. Nor are you the frakking airhead pansy-arses of the voidsters. You are Tactical Marines.”

If he weren’t clamped securely into his gibberball, Rosenberg would have held himself a little straighter. It stood to reason that Tac Marines were the best.

“You and your Tactical Unit warboats are the perfect symbiosis of human and machine,” the sergeant major continued, “the ultimate killing combination. These Mark-7 TUs are the best that man, God, or alien has yet devised. Which means you must be better than your forebears. The Legion heroes of Maroo-6 would raise their glasses to you, stop boasting of their great victory, and ply you with drink to hear of yours. And if you met Senior Shoal Commander Luelmas-Shan in the afterlife, she would make her excuses and leave, because despite her exploits in the Battle of Sorrow, even she would have to acknowledge that you are the ugliest, rowdiest bunch of desperados in the Legion. Hell, if she were still alive, I’d lock up my mother for her own safety if you came within 10 light years, and she was a Marine sergeant. You know why?”

“No, Sergeant Major,” Rosenberg whispered to himself.

“I’ve been in this war since the very beginning,” growled Hecht fiercely. “Hell, I helped start it. And I can say without doubt that you are the best damned unit of soldiers the human races have ever produced. What are you?”

“The best,” chorused Rosenberg and the thousands of other Marines encased in their gibberballs on the outside of the warboats – the gel-filled EVA launch bubbles stuck onto the TU holes like skin pustules.

“I’m sorry,” said Hecht. “Did someone say something?”

“The best!” came the reply through the regimental channel.

“Damn frakking right you are. I know it. You know it. Now go show those flea-bitten, sex-crazed bastard Hardits the truth of your superiority.”

“LEGION!” came the response, but the voices were fractured because, with a heart-in-throat lurch, the fleet of warboats had abruptly changed bearing. What now? 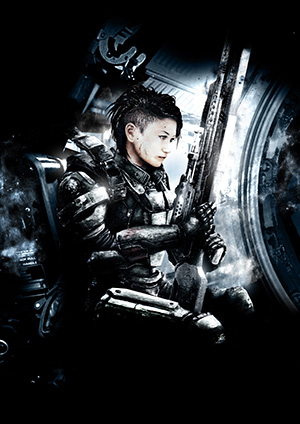 “It seems we’re taking one more sightseeing loop around Luna,” explained Hecht after a few heart-stopping moments of silence. The old sergeant major was himself entombed in a gibberball, but you’d never know from the steadiness in his speech. “Seems the Hardit goat chodders weren’t quite ready to invite us in. No offence, Lieutenant Commander Quassi-Haex.”

Rosenberg wasn’t expecting this change of tack from Hecht. Lieutenant Commander Quassi-Haex was chief engineer for one of the sleeve ships, the mothers to the TUs that transported and nurtured the warboats across the vast distances between battles zones. Rosenberg had seen many strange things in the war, and having Hardits serve the Legion with honor was one of the strangest.

“I’m afraid that’s not good enough, Sergeant Major,” said the Hardit in a computer-translated voice. “You Tac Marines need to do far more than show the defenders of the Carbuncle who’s best. I want you to crush them. Bite them. Slit them open while they still breathe and shit in their chest cavities. Your enemies are the abominations of the New Order, and your duty is to wipe their very memory from the galaxy.”

“Thank you, Lieutenant Commander,” said Hecht in a strangely quivering voice that Rosenberg would interpret in any other person as laughter, if it were not a known fact that Sergeant Major Menes Hecht was incapable of such a thing.

“I can summarize the officer’s instructions in two words,” said Hecht. “No. Mercy.”

“No mercy!” shouted Rosenberg. He was about to repeat the chant when the interior of his gibberball started glowing with green light.

Lieutenant Harper stepped hard on DeRuyter’s gas pedal and, despite the buffer gel and the momentum-dump magic, it was as if a Tallerman had grabbed Rosenberg’s cheeks from behind and was pulling back for all it was worth to test the tensile strength of human skin to breaking point… and beyond. Rosenberg deployed every ounce of strength just to keep conscious.

Just got to hold on… he told himself. Just a few seconds more…

But the seconds stretched on with excruciating slowness.

I’m a Tac Marine, dammit. I was built for this.

And then the agonizing, disgusting magic happened. In a confusing blur, the gibberball was blasted into the void and erupted in a halo of flash-frozen gel. Rosenberg’s own body purged itself, the suit dumping the expelled contents into space and adding a flurry of defensive munitions to cloak the Marine-Grenadier as he emerged into battle, suit stealthed.

Rosenberg’s AI brought him fully back to working order with the equivalent of a sharp poke in the buttocks, and then placed a composite of visual and tactical information on the inside of his helmet visor.

The Carbuncle, they called it. Their target was a bulbous, warty orbital station that was the local Hardit command and control center, and it was rapidly filling his visor thanks to the momentum imparted by the TU. At the same time as throwing Rosenberg around furiously to avoid presenting an easy target, his combat suit motors were braking his approach as hard as it could without compromising its stealth capability.

The AI put a wordless tactical summary into his mind. The formidable defenses of the station had been badly degraded by the Legion X-Boat squadrons, although it seemed that Mad Dog Caccamo’s squadron had paid a heavy price in the process. The Tac Marines were only facing basic point-defense railguns firing blind. The cloud of dots around him that represented his brother and sister Marines began to wink out nonetheless.

Although he was flying through a wildly random approach, his body remained oriented toward the target. He set his assault carbine to X-ray mode and stitched a line of high-energy particles through the fast-approaching Carbuncle, pausing frustratingly often when the carbine battery needed to recharge.

The Hardit guns soon fell silent, though, and the thermal view showed the station’s hull was quickly heating up, which meant the enemy’s thermal shunts had been destroyed in the X-ray volleys. If that station couldn’t radiate heat, it was going to literally melt from the inside, but not before the Marines had retrieved the intelligence their assault force had bled for. Not if Marine-Grenadier Michael Rosenberg had any say in the matter.

“Oh, I’m ready,” he whispered to himself as he clamped his carbine to his back and reached for his breach pack, all the while picturing the doomed Hardits inside the Carbuncle.

“I’m ready as hell. This is payback!”

That’s it. Hoped you like it. The image, by the way, is of Lee Xin from the revised cover by Vincent Sammy of Human Empire getting ready to save the day in the Second Battle of Khallini in 2602AD (the scene above takes place in 2739). Talking of Xin, the last we heard of her, she split the Legion, jetting off into the sunset and taking half the fleet with her. Does she still have a part to play in the story of the Human Legion? That would be telling, but… yes. Yes, she does.