The first of two Human Legion box sets has just been released. I’m going to add as many of the short stories, novelettes, articles and author notes as I can*, which is why I added the ‘deluxe’ label. I hope you feel it’s justified! It’s a cool image of a slipcase box, but regrettably, that’s just the publishing fashion and this is only available as a Kindle book. The good part of that, though, is that if you have a Kindle Unlimited subscription, you can borrow this for free and skip to the bonus material if that’s what you prefer. CONTENTS 2741 AD – Preface 2565 AD – Marine Cadet (novel + new author notes) 2566 AD – Indigo Squad […]
Do you like it?
0 Read more 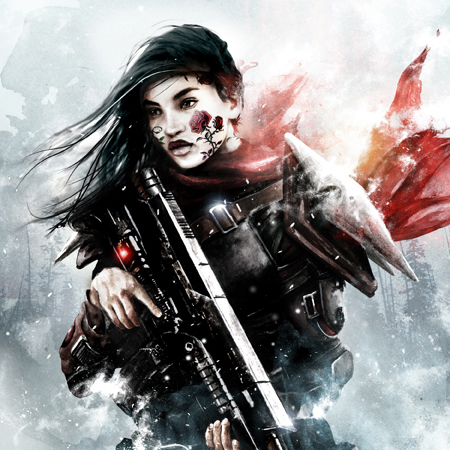 The Chimera Company artwork from Cape Town artist Vincent Sammy is coming in now and helping me the visualize the scenes as I get ready to write the last couple of issues of season 1. The portrait you seeing here is of Militia Trooper Lily Hjon, a disgraced captain busted down to the ranks and placed in a punishment company. Some say Lily holds a few grudges; most know to keep such thoughts to themselves. Lily has an all-body tattoo, but it’s not the kind of traditional ink worn by Lance Scipio and many of the characters in the books from earlier series. Hers is a viral-written bioprogram that writes itself as pigmentation directly into the skin. The color palette […]
Do you like it?
0 Read more

You can now read the story of the Human Legion’s final campaign. The Battle of Earth Part1: Endgame and Part2: Restart are available now in the Kindle store to buy, or borrow for free if you’re a Kindle Unlimited subscriber. Paperbacks are not yet ready, but should be by mid-week. I’m really proud of this double-bill climax and I think it benefited more from Recon Team advice than any other book, so thank you; it was a team endeavor. It’s been a while since the last main-line Legion novel, War Against the White Knights, was released, and I know some readers have subsequently come across me from my work with Revenge Squad, the Four Horsemen Universe or elsewhere. For both those […]
Do you like it?
8 Read more

At some point over the next 12 hours, War Against the White Knights should pop up on Amazon. It will be Kindle-only initially, although the paperback will follow in about a week. I’ll make a big fuss about it next week, but I reckon my job’s done for tonight. Tomorrow morning I’m off to a science fiction convention in Manchester, England for the Easter break. Much more on this next week when I’m back. And future projects too! Enjoy the book.
Do you like it?
4 Read more

The launch of a major new military sf anthology.
Do you like it?
6 Read more

More announcements! You’ve probably seen plenty of box sets in the Amazon Kindle Store in recent years. The idea is that several individual titles are collected into a single Kindle book, and usually presented at a bargain price. The books are connected by a theme, and the first Kindle military SF/ space opera themed box set that I’m aware of was Stars & Empire, which came out last year and did very well. These box sets are a very good idea, I thought to myself. So I decided to make one of my own. I wanted a strong theme, which took me a while to dream up. Then it occurred to me that I had discovered other British military […]
Do you like it?
9 Read more

Not by me, unfortunately, but there’s a podcast interview by the #Wrongfun podcast team that they carried out at the recent Honorcon militarySF convention at Raleigh, NC. [The interview is episode 7, which you can find here.] It’s a small world, because a guest of honor at next year’s Honorcon is Christopher G. Nuttall, and in a few days I’ll be announcing a collaboration that Chris and I are working on together. If you don’t know about Marko Kloos and his ‘Frontlines’ series, then I recommend you check him out. I read the first book when it was still self-published by Marko, but now he’s published by 47 North (a very successful division of Amazon) which means he gets smarter […]
Do you like it?
3 Read more

Have a science fiction Christmas with Human Legion audiobooks

Tantor Media have been busy producing audio editions of the first three novels in the Human Legion series. Narrator Tom Zingarelli does a fantastic job of bringing Arun McEwan and the others to life. It is a strange experience for me to hear a voice actor speak the words I wrote in 2014.   You can hear a sample of Marine Cadet here and of Indigo Squad here. You can pre-order CDs or an mp3 download at the Tantor website (follow the links above to the audio samples). You can buy CDs from most Amazon stores too, though at the moment the purchase links seem to be for CDs only and aren’t available in Australia. The audio edition of Marine Cadet […]
Do you like it?
5 Read more

I’m very pleased to announce my first collaborative writing project, Human Empire, the fourth in the six-book Human Legion series, is now available to buy from the Amazon Kindle Store here. It’s got space battles, aliens, treachery… all the usual good stuff. We’re moving up in scale too. Ian and I wrote scenes with dozens of ships and tens of thousands of people. Admittedly, we didn’t exactly describe each person’s experience in detail, but we think there’s a greater feeling of scale in this book, something that’s going to get even bigger with the next one. As normal, the book will initially be on sale for a bargain launch price of 99c/99p or local equivalent for at least a few days. I’ve […]
Do you like it?
24 Read more