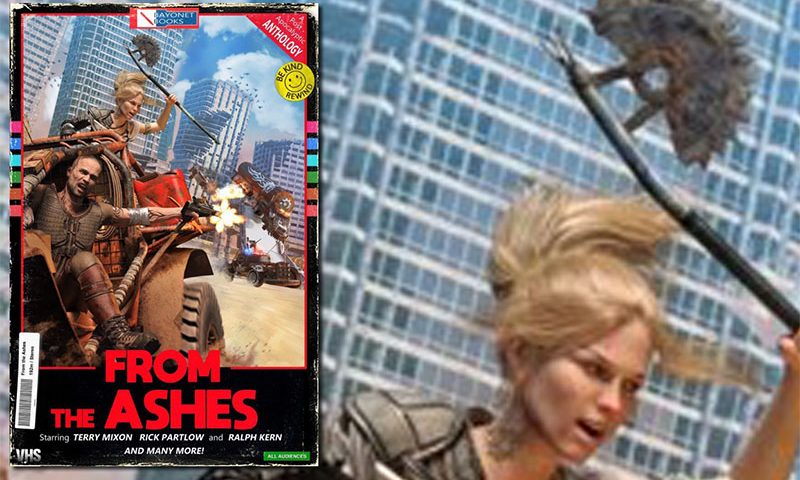 In case you missed it, my latest anthology came out last week in From the Ashes, the latest anthology from Bayonet Books. The theme for this anthology is the post-apocalypse and my story features orcs, humans and Chinese vampire deer in the ruins of Bedfordshire.

I haven’t read all the other tales yet, but I read Walt Robillard’s story and its full-on action that also features orcs and humans. But the orcs in Walt’s case are three meters tall and wield sharpened road signs as axes. Nice.

(Walt’s the voice talent on the Human Empire audio, BTW, which is very close to completion now).

I’ve been in three of the four Bayonet Books anthologies to come out over the past thirteen months. Reckon they look mighty fine next to the Legion mug I like to caffeinate from when I’m working. (The wear on the From the Ashes book is fake, which really messes with my mind in the paperback version 🙂 )

If you want to pick up From the Ashes, it is temporarily in Kindle Unlimited and always in paperback. You can find the eBook details here and paperback here.

Next up from me will be Endless Night, the latest novel in the Four Horsemen Universe Guild Wars (4HU season 3, essentially) due out Feb 14th, which will be a nice way to mark my 50th birthday a few days earlier!

In March, I’ll finish the sequel to Endless Night, possibly release the Human Empire audio if I don’t put it out in Feb, and I’ll be appearing at the Fantasci convention at Durham, NC March 20th-22nd.

Then it will be the second Human Legion box set and another quick Midnight Sun 4HU novel (quick because I’ll be to co-writing it, something I’m very keen to try again). Then it’s back to adventuring across the Federation with Chimera Company.

We’re not finished yet. Not by a long shot!