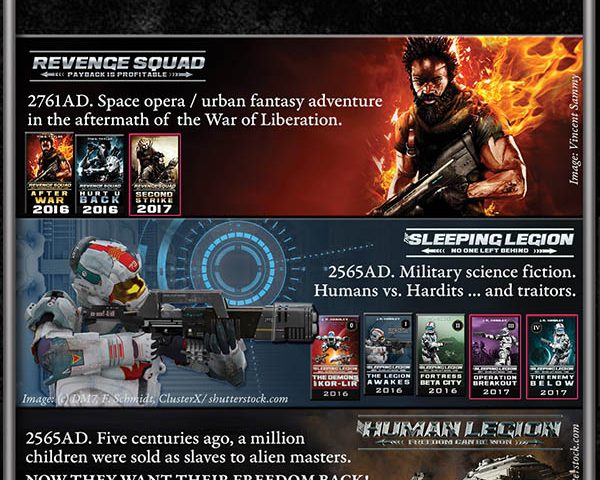 I want to thank everyone for their contribution to the Legion in 2016 and hope you join us for the 2017 campaign. It’s been a hard year, and with long gaps between releases, but we’ve both grown as a team, and delivered some books I’m truly proud of. And I keep saying ‘we’ rather than ‘I’, that’s because these book projects have all been team efforts.

Our first release came out in February 2016. This was a multi-author box set called The Empire At War, featuring some British military science fiction authors: Chris Nuttall (Ark Royal etc.), PP Corcoran (Discovery of the Saiph etc), Phillip Richards (The Union Series). I’m in it too with Marine Cadet, an exclusive Human Legion short story called The President’s Son, an article on the state of British military Science Fiction, a suggested reading list, and a short story to go with a series of illustrations by award-winning artist, Andy Bigwood.

The Empire at War remains a good way to get into some of our book series (and is now available for iBooks, Kobo, and Nook). It never occurred to me to consider the nationality of authors before I got involved with this project. I just read books! I was surprised at how many Brits are doing well in this field. The box set sold modestly well (a few thousand copies and a #1 Amazon spot in the science fiction anthologies chart) but didn’t quite hook into the Downton Abbey swell of interest. It was a lot of work, with the artwork requiring a last-minute alteration as one of the authors pulled out when the agent got around to reading the contract. You can spot that clearly if you look closely at the box image!

I managed to annoy several people for not mentioning Warhammer 40,000 novels enough. It’s a shame, because I did have a lot to say about Warhammer 40,000, but that was mostly in the reading list which the publisher cut out of the book to encourage people to go to this excellent website here: http://britishmilitaryscifi.com/ (BTW: I’m not knocking the publisher as this made sense).

Tantor Media are the largest English-language independent publisher of audiobooks, and they signed me up late in 2015 to produce the first three Human Legion books in audio. By March the results, narrated by the excellent Tom Zingarelli, were out in the world on CD and digital download. The audio books are very classy, but to be honest I think the initial price was off-putting. But the price came down, and before long you could pick up the audio narration as an addition for a few dollars when you buy the Kindle edition. For some reason the Human Legion audios do well in downloads from US libraries. 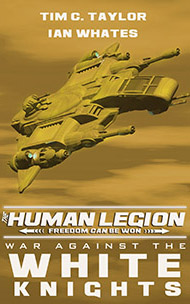 March also saw the release of War Against the White Knights, the fifth Human Legion novel, and the first sight of new Human Legion team member, Donna Scott, who twiddled the editing knobs in this book. I think it’s the best book of the series, but its production hit many frustrating obstacles that meant the book was very late, and I was left demoralized. I decided to take a break before finishing the series, and develop a project I had started while writing War Against the White Knights. That wasn’t an easy decision to make, but at the moment I’m waking  up the middle of the night because I have so many fresh ideas about how to finish book 6: The Battle of Earth. It’s good to write a book that is hungry to be written, and that’s what’s going to happen in 2017.

April saw a lot of behind-the-scenes work that led to a revised website and the start of the Legion Bulletin, which was very quiet for the first few months as I didn’t have any books to release. Now I have so much to talk about that I can release a new issue of the Bulletin every week if I wanted to.

In July, NewCon Press launched an anthology of military Science Fiction short stories called Crises and Conflicts, which featured a Human Legion story by me called Hill 435, which is set between War Against the White Knights and The Battle of Earth. The book hasn’t seemed to sell many copies, but I did pick up a nice review from SF Crowsnest a few days ago here, and at the launch party I got to sit next to Peter F. Hamilton and give him a piece of my mind. You see, my wife doesn’t read science fiction, not even my ones… unless they’re written by Peter F. Hamilton. I think Mr. Hamilton thought my complaint about his monopoly access to my wife’s sci fi reading habits was funny. Or at least, harmless. In any case, no cops were called.

Things got more serious after the summer with a lot of behind the scenes work on two new series, Revenge Squad and The Sleeping Legion. We brought in Corey Truax, and his beard, to add to our editing team, and tried out the new BattleNet forums in which our Recon teams gave some valuable feedback on the new books.

Finally, releases started to come in December. Lots of them. 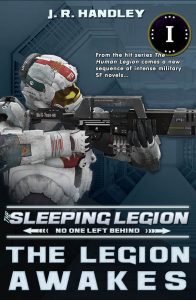 The Sleeping Legion, by JR Handley, now has three released books. The prequel novella (which is like a cross between the films Alien and Aliens) is out in paperback and Legionaries can download it for free if you look at the bottom of your Legion Bulletins. The first two novels: The Legion Awakes, and Fortress Beta City, are out and charting nicely. Last time I looked we were number two in military Science Fiction in Australia. A little behind in the US, but not far.

These books start off on another continent and in an earlier time from what we see in Marine Cadet. By the time of Fortress Beta City, we’ve picked up the thread left in Human Legion Book4, Human Empire, and find out what happens to Col Nhlappo and her expeditionary force left stranded at New Detroit in the face of a Hardit onslaught. Humans versus humans. Humans versus Hardits. Hardits versus Hardits. There’s a lot of fighting left to be done, and there are at least two more novels in the series, which I will be releasing in 2017.

If you don’t know much about JR Handley, I recommend reading this interview first.

I kicked off my new first person series called Revenge Squad with the first novel, After War, and a second short novel, Hurt U Back, available as a free download for Legion bulletin subscribers. The plan had been to release After War, Hurt U Back, and the next novel simultaneously. Unfortunately, plans don’t always work out and that next book isn’t yet ready. Which leaves the series looking a bit odd because readers will pick up the first book, join the Legion and then download the second, but don’t yet have anywhere else to go. Also, I’m cautiously labeling the series urban fantasy/ space opera crossover, because that’s what I’m thinking of as I write the books. It’s accurate too, I think, but not so much for the first book, which is light on the urban fantasy. I’m working on it…

We are not quite done with my write up of 2016, because I started posting a miniseries of flash fiction that describe some of the details of the Revenge Squad world. They called Ndeki’s Notes, and you can find them here. More will come in about a week.

Rather than describe the 2017 campaign, I drew a picture so I don’t have to. If you tap or click on the image, it should grow bigger. 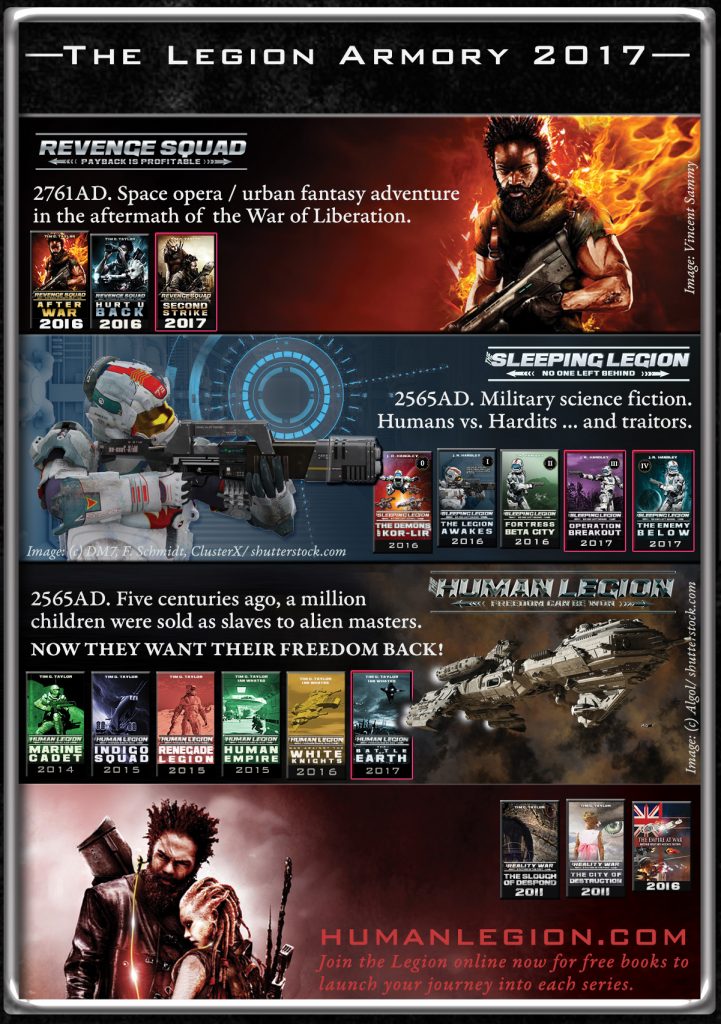