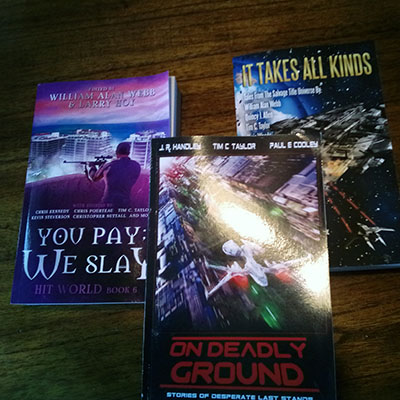 It’s anthologies week at Legion HQ. Three paperbacks arrived this week and I’m hugely proud that my name is on the cover of all three.

You Pay; We Slay is the brand new one that was launched on Friday. This is set in the Hit World universe, which is similar to our own except that licensed assassination is legal. And there are aliens and magical creatures and much that is weird.

In my effort for this anthology, Being Cassidy Dupuis, I deliberately avoided any science fiction and fantasy angles. Just human beings, albeit extreme ones.

If you like it, let me know and maybe I’ll write some more Hit World. You can find more info on amazon.com here.

As a trivia point, it was nice surprise to learn that Chris Nuttall was also in this anthology. I’ve always been an admirer of his writing, but I don’t think of myself as having collaborated with him in a writing sense. That’s not entirely true, though. We’ve both written for Hit World and the Four Horsemen Universe, and we’ve had stories in the same anthologies at least three times. Possibly more. It’s a lot of work to keep track.

I definitely did collaborate with Chris a few months ago with some book formatting assistance. This is for a Sci Fi Readers Club collaboration that isn’t quite ready to announce.

Also, thanks for everyone who wrote to suggest I write some fantasy novels. I read my first epic fantasy novel for many years this week. I simply picked a book from an author I’d never read before by browsing the Amazon charts. This was The Killing Fog by Jeff Wheeler.

Loved it. Not sure I’d want to do all the China-themed stuff that Mr. Wheeler delivers so well, but it’s definitely given me a fantasy writing itch that I need to scratch.